On Board with fCAL® turbo at Cumberland Infirmary -

On Board with fCAL® turbo at Cumberland Infirmary

Pamela Bowe, Team Manager in the Department of Biochemistry at the Cumberland Infirmary tells us about her experience introducing the BÜHLMANN fCAL® turbo faecal calprotectin assay into her laboratory.

Faecal Calprotectin is used in the differential diagnosis of inflammatory bowel disease (IBD) or irritable bowel syndrome (IBS), as well for monitoring disease activity in IBD. Since NICE recommended its use in 2013 (Diagnostic Guideline 11) there has been a large increase in demand for this test.

We have been analysing faecal samples for calprotectin in-house since 2012. Originally our workload was approximately 40 samples per month but by 2016 this had increased five-fold to more than 200 samples each month.

In order to cope with the increasing workload our method of calprotectin testing has evolved over time. Initially we started with the single use Quantum Blue® fCAL cassettes and readers. In 2015 we progressed to the BÜHLMANN fCAL® ELISA which was semi-automated using a Dynex DS2 supplied by Alpha Laboratories. Then, in November 2016 we advanced to automating the BÜHLMANN fCAL® turbo, particle enhanced turbidimetric immunoassay (PETIA), on our Roche cobas® 6000 line using the c501 module. Samples were extracted using the BÜHLMANN CALEX® extraction device, prior to analysis, using both the ELISA and PETIA methods.

We are running high on EQA at concentrations >100μg/g (when compared against the ALTM); in the absence of a commutable reference standard it is hard to know which method is correct.

We have been confident enough in the results to move from running the assay in duplicate on the DS2, to running in singleton on the cobas.

We now report results up to 1800 μg/g which is the linear range of the PETIA assay without dilution compared to 600 μg/g for the ELISA.

The stated on-board stability of the assay is 60 days, but we get 215 tests out of each reagent pack, and with our throughput, reagents are never on that long.

The faecal extracts are loaded directly onto the cobas 6000 in the bar-coded CALEX extraction devices. This is one of our main analysers and I was sceptical of running faecal extracts. However, additional wash steps have been included. We run them in batches to ensure there is no cross-contamination.

By consolidating this assay onto our main platform we have saved a significant amount of staff time and removed the potential for transcription errors (the DS2 was not interfaced). It has also freed up bench space as the DS2 has been returned.

The assay parameters were easy to install once Roche opened a third party channel. We have been happy with the stability and performance of the BÜHLMANN fCAL turbo assay over the last couple of months.

There has been much interest in the BÜHLMANN fCAL® turbo assay since its UK launch in early 2016. With increasing demand for faecal calprotectin examinations, there is a growing need for a flexible, random access, high throughput assay that can be performed on open clinical chemistry systems.

fCAL® turbo studies have been conducted all over Europe on many different analysers. During these evaluations, some laboratories undertook sample exchanges with BÜHLMANN in Switzerland, using extracts generated from frozen faecal samples, so that results from different analysers could be compared. 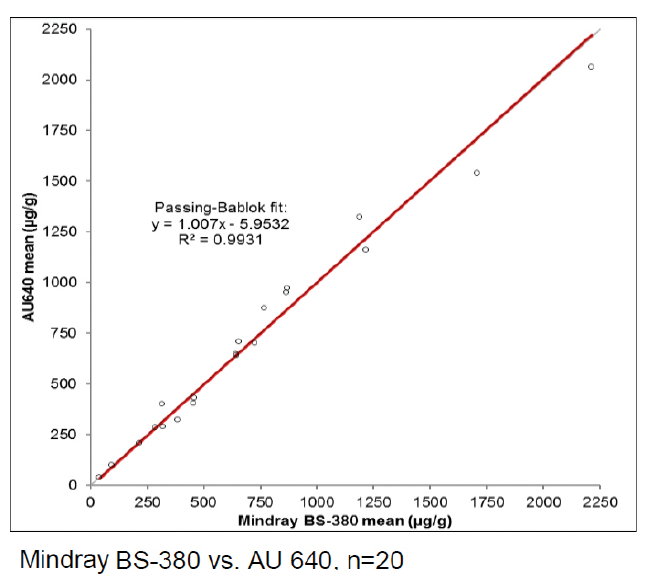 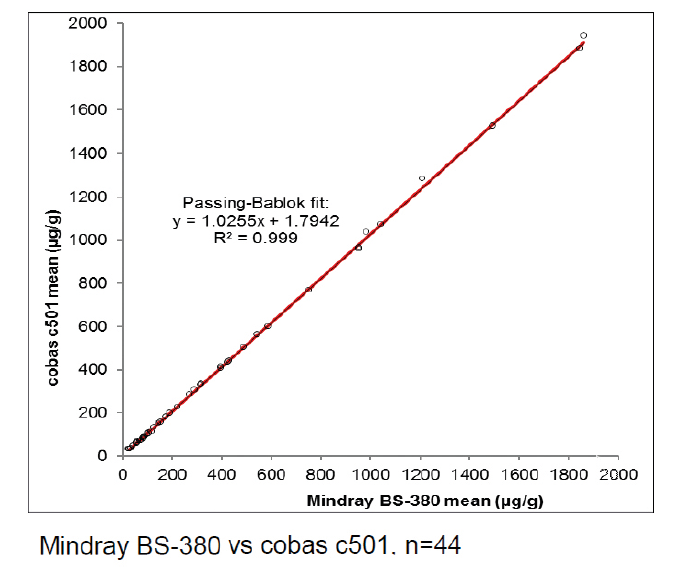 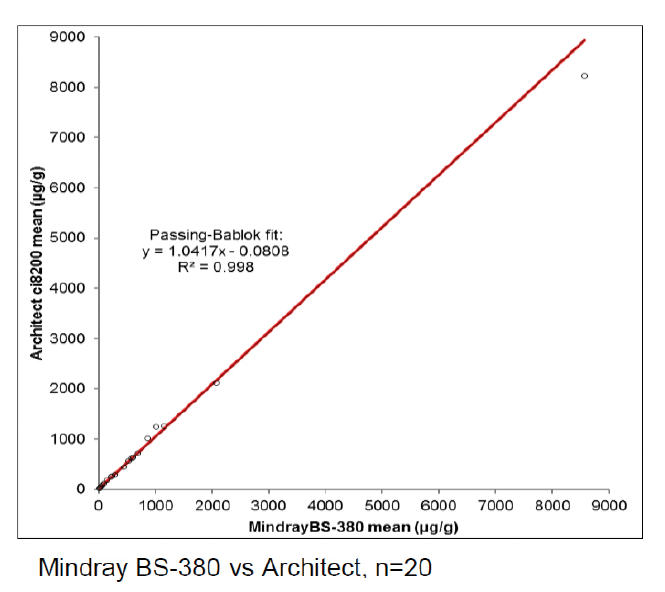 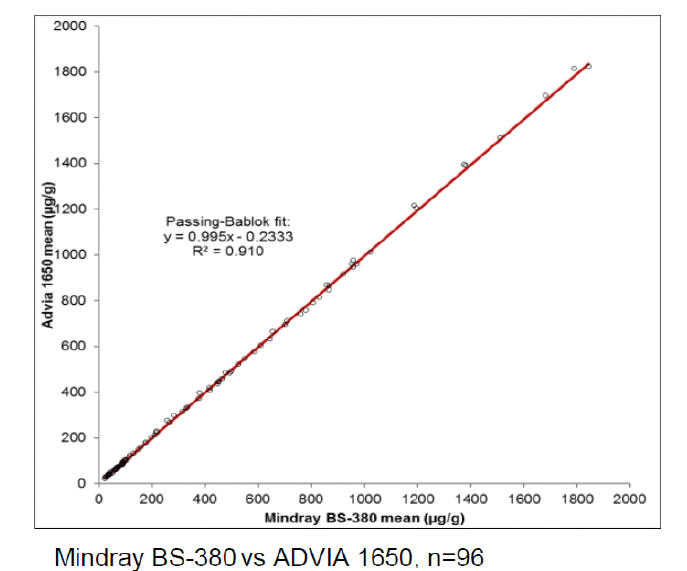 BÜHLMANN have a stand-alone Mindray BS-380 analyser, while the other participating laboratories used analysers from Siemens, Beckman, Roche, Abbott, Thermo Scientific and Mindray. Excellent results were achieved on all systems as can be seen from the example graphs to the left and the data in Table 1. These show the consistency in calprotectin concentrations found across multiple analysers.

With an average R2 of 0.985, the calprotectin concentrations obtained with fCAL turbo on different analysers are highly correlated. This instils confidence in the comparability of data between sites and consistency of data over the movement of patients between test locations. It provides ultimate flexibility for future proofing calprotectin services due to analyser upgrades or a change to different analysers.

The complete set of correlation scatter plots can be seen at: www.alphalabs.co.uk/turboresults 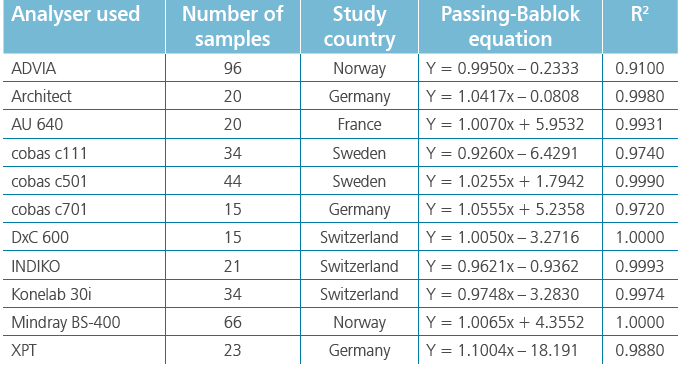