At the Biochemistry Department at Mercy University Hospital (MUH) in Cork we had been sending samples for faecal calprotectin testing away to a referral laboratory for analysis.

This referral laboratory uses the Phadia 250 ELiA'” Fluorenzyme-lmmunoassay. The problem was that this was quite expensive and the turnaround was initially up to 6 weeks,which is too long for the IBD clinic. To try to improve the service we started to investigate the options for bringing calprotectin testing in-house.

ELISA is the standard method for measuring faecal calprotectin, but is time consuming and requires specific laboratory equipment that we didn’t have or the space to accommodate.

BÜHLMANN Laboratories has recently introduced the fCAL®turbo calprotectin assay which runs on many open clinical chemistry platforms. Since this gives results significantly faster than ELISA with no additional equipment, service contracts or staff training required it looked an attractive option. At the MUH there is capacity on the Abbott Architect C8000 analyser so this is what the fCAL® turbo protocol was evaluated on.

During the evaluation, stool samples that were received into the laboratory were extracted using the BÜHLMANN CALEX® Cap extraction device and either tested straight away or the extracts were stored at -20°C for later analysis of calprotectin by the fCAL®turbo assay. The stool samples were also sent under refrigerated conditions to the referral laboratory, where they were extracted using the Thermo Scientific ELiA extraction device and assayed on the Phadia 250 ELiA. Overall, sixty clinical samples in the range < 5 to > 3000µg/g faeces were tested during the evaluation, using both the Phadia ELiA and BÜHLMANN fCAL® turbo method.

Although we were initially nervous about putting faecal samples on the Architect, we didn’t experience any problems. Three quality controls for all the routine chemistries were run after the calprotectin assays and no errors were observed.

A scatterplot of the results is shown in Figure 1 with a Pearson Correlation Coefficient of 0.930 achieved. This study data correlates with many other studies which have demonstrated the inter assay variability between all of the Faecal Calprotectin assays. A p=O demonstrates a sta­tistical significance between the two methods with a mean difference of 245 .

All 60 results from the two methods were reviewed by the IBD medical team (Table 1 ). The patient charts of the 22 discrepant results were reviewed for colonoscopy reports, if they were performed, and clinical presentation, to help determine which of the assays produced the more accurate results.

At the beginning of October we introduced the BÜHLMANN fCAL turbo assay for routine on-site testing of faecal calprotectin on our Abbott Architect C8000. We are using the full assay range to allow for monitoring at the start. We will also be extracting the samples into the CALEX® as soon as possible, since we found during the evaluation that there was deterioration of calprotectin in the faeces even when stored at 4°C. 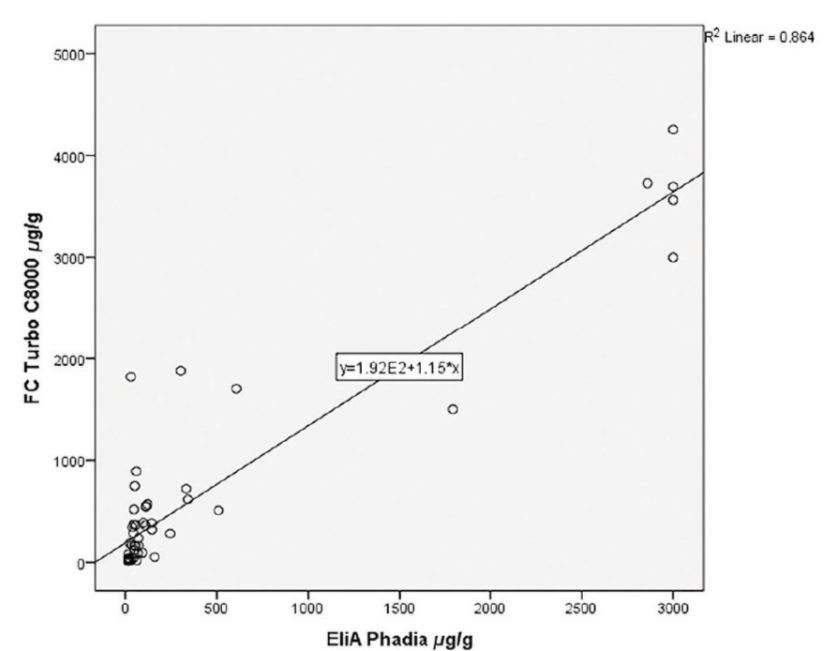