with the CALEX and Roche cobas c702

Faecal calprotectin testing is used to help exclude inflammatory bowel disease (IBD) in patients with lower gastrointestinal symptoms. This is extremely useful, as most patients with these symptoms have IBS, and do not need to be referred to Gastroenterology.

We did not previously offer this test, but there has been an increase in demand for it from our local primary and secondary care populations since the introduction of NICE Diagnostic Guidance 11 in 2013.

Originally we planned to introduce the BÜHLMANN fCAL® ELISA assay into the laboratory. However, with the release of the BÜHLMANN fCAL® turbo method, a particle enhanced turbidimetric immunoassay, we saw the opportunity to bring the test in-house, without having to acquire a new platform.

As the kit was already CE-marked for the Roche cobas® c702, of which we have three units for our routine biochemistry tests, we decided it would be simpler to introduce the method on this platform, via a third party development channel.

Installation of the assay settings on the analyser and interfacing to the laboratory IT system was straightforward with the information supplied by BÜHLMANN. Extraction of the faecal samples prior to analysis was achieved by use of the BÜHLMANN CALEX® extraction device.

Bias of the assay was examined using EQA samples from NEQAS. A positive bias was found against both the All Laboratory Trimmed Mean (ALTM) and the BÜHLMANN ELISA, however, all data showed the same consensus interpretation and within two standard deviations of the ELISA mean. However, the lack of a commutable reference standard makes EQA data hard to interpret. Comparison of results with another laboratory, running the automated fCAL turbo assay on an Abbott platform, showed <10% difference between the two instruments, on all samples analysed.

The assay displayed excellent linearity (Figure 1), over the initial measuring range (up to 2440 µg/g) and appropriate precision at the limit of detection (30 µg/g). This large analytical range was superior to the ELISA assay. It enables screening of undiagnosed patients and monitoring of known IBD patients using the same assay.Routine running of this automated assay has demonstrated clear benefits in staff time compared to manual techniques such as ELISA. Interfacing of the analyser results directly into the lab IT system reduces the number of manual transcription steps required. These benefits have helped us to introduce an efficient and consistent service to our users. 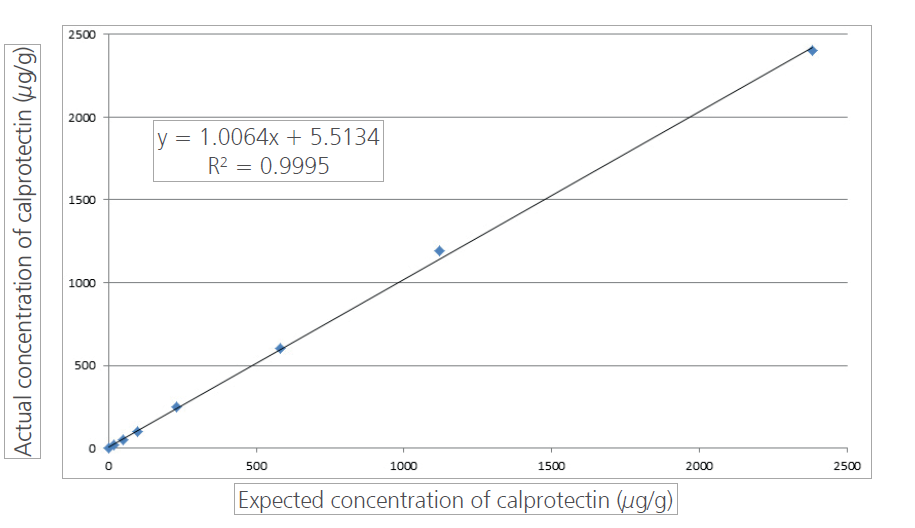