At the largest hospital in Tees Valley, serving around 1.5 million patients, Mr. Andrew Teggert and his team at James Cook University Hospital have recently made changes to their faecal calprotectin testing. Amanda Appleton, Product Manager from Alpha Laboratories spoke to Andrew to discuss the evolution of their service from BÜHLMANN Quantum Blue® to BÜHLMANN fCAL turbo® and the running of the protocol on the Siemens Advia 2400 XPT.

Quantum Blue (QB) was initially introduced into the hospital in 2011 for Gastroenterologists and Colorectal Surgeons to assess patients prior to endoscopy. Testing is conducted twice per week: we have found that gastroenterologists are satisfied with a 3-5 working day turnaround time.  However with calprotectin testing rising to 50-60 per week, QB was inefficient for the current staffing pressures faced by the lab.

We looked to introduce another method because the cut-off of 300 μg/g was also proving too vague for monitoring of quiescence and relapsing disease, and being able to quantify calprotectin at the higher level would prove valuable.

There was also the intention to roll-out testing to Primary Care. Working in conjunction with Dr. James Turvill (York), we introduced his patient pathway, ‘The York Care Pathway’ for the implementation of faecal calprotectin in Primary Care.1

This involves using more comprehensive banding groups; a result of <100 μg/g is classed as IBS, a result >100 μg/g will be repeat tested 2-3 weeks thereafter, and if the second result was >100μg/g, or the first result was >250μg/g, the patient would be referred to gastroenterology immediately.

This service was rolled out in April 2017. It has been very important from an early stage to involve all major stakeholders in these decisions; lab staff, gastroenterologists and primary care providers.

We provide services to two CCGs and we were fortunate enough to receive funding from both for this. The test numbers have pretty much doubled since the service was introduced, but this is still primarily due to samples from Secondary care; there has been no explosion yet in Primary Care workload.

Having initially used the QB with the Roche collection device, then progressing to BÜHLMANN CALEX during the evolution of the QB process, the transition to fCAL turbo for the lab staff in this respect was very simple as the change in sample preparation was kept to a minimum.

Implementation was very straightforward using the BÜHLMANN instrument specific parameters. There was one issue initially with some low level imprecision; however, this fault was found to be limited to a specific instrument which we realised because we experienced a similar problem with another assay.

We switched the XPT instrument we were using and have not had any issues since.

We place the CALEX directly on the analyser with no worries: at 1:500, the dilution of the faecal matter is quite significant and contamination risk isn’t much worse than for a urine fluid specimen.

We normally process the stool into the CALEX and then refrigerate for analysis later. The CALEX devices are centrifuged and then inspected for particulate matter prior to loading onto the analyser; we haven’t needed to withdraw any with visible particulate matter and we have been running routinely for about a year now.

fCAL turbo has made calprotectin analysis significantly easier. From  a staffing point of view, it is a lot less hands-on than QB, and a major advantage is the direct link between the analyser and the LIM system: with the QB, results had to be manually transcribed into the patient record; with the fCAL turbo there is no transcription error risk and it is much more time efficient.

The gastroenterologists have been kept in the loop from beginning to end. The results have been comparable, and the higher result range (up to 6000 μg/g) has proved very beneficial for them. A review of the results we have been getting has shown that <2% of samples give results higher than the initial 2000μg/g and are diluted and rerun.

I would recommend the fCAL turbo to other labs; the gastroenterologists are very pleased with the wider result range and the lab appreciates the automation and the reduced hands-on time. The direct interfacing eliminates transcription errors, improving the reliability of data for the patient and the quality of service. A quick turnaround time, less involved protocol for the lab staff, and good quality data means I would wholeheartedly recommend the BÜHLMANN fCAL turbo to other labs. 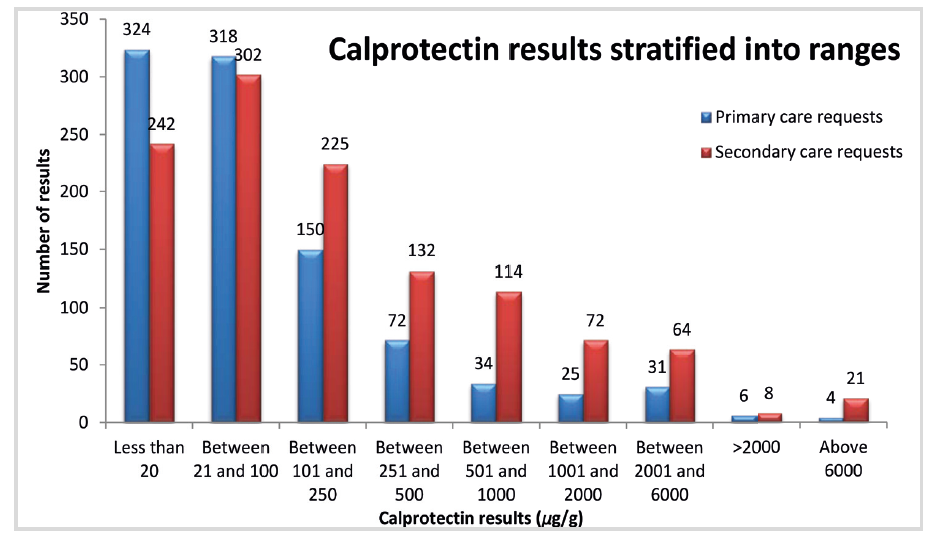